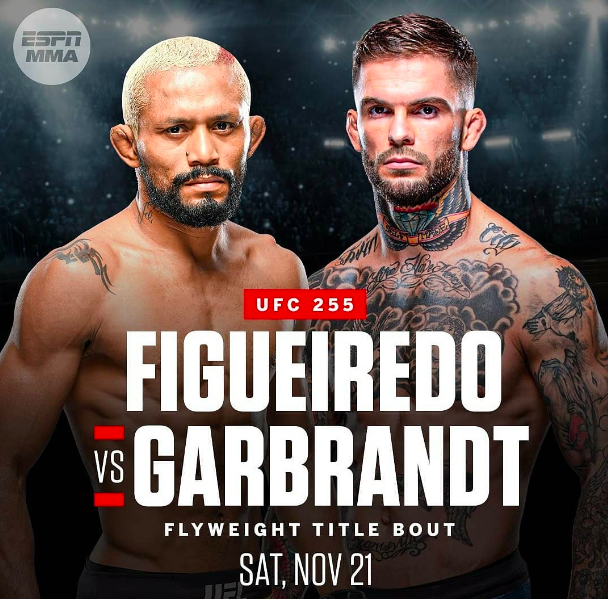 According to the opening UFC 255 odds Deiveson Figueiredo is the (-200) betting favourite. That means if you bet $200 you could profit $100. Meanwhile, Cody Garbrandt being the underdog means a $100 wager could win you $170.

These opening Figueiredo vs Garbrandt are available at BetOnline.ag.

The UFC is still hot on Cody Garbrandt, it’s clear to see the former champ is a fan favorite with the numbers he’s draw win or lose. This will be Garbrandt’s first UFC fight at 125 pounds.

For Garbrandt (12-3), who managed to pick up his first win since 2016 at UFC 250 against Raphael Assuncao, it could be a real moment to be back on top. Garbrandt defeated Assuncao in true fashion with a highlight reel second-round KO. This will be Garbrandt’s first championship fight since losing the rematch to TJ Dillashaw at UFC 227.

Deiveson Figueiredo (19-1) was steadily climbing the UFC ranks and improving these past few years. He captured a vacant flyweight title in July, defeating Joseph Benavidez by first-round submission. It was the second straight meeting between the two as Figueiredo also defeated Benavidez by TKO in February, but was ineligible to win the vacant title then due to missing weight for that bout.

Figueiredo has impressed with his speed and KO power. Many pundits are saying the UFC are handing Garbrandt the title. Whereas other fear for Garbrandt’s chin with the added weight cut, given his previous KO losses.

Expect the betting line to come closer in favor of Cody Garbrandt, so if you are a Cody fan get on these early odds as an underdog!