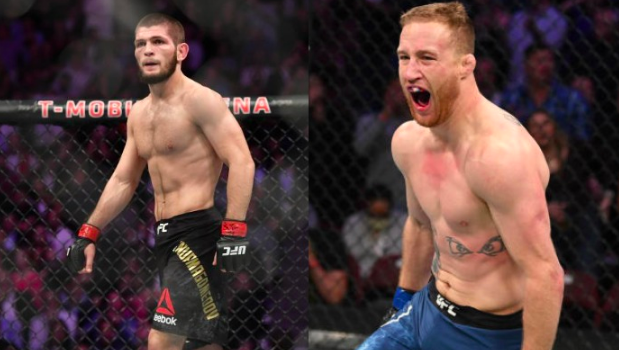 October 24 is the date set by the UFC for Khabib Nurmagomedov to defend his lightweight title against Justin Gaethje. We preview the opening Khabib vs Gaethje odds below with updated UFC 254 odds and predictions here.

According to the opening odds Khabib is a sizeable betting favorite. (Bet $350 to win $100). With The Champ having an implied probability of 77% to defeat Justin Gaethje.

The challenger Justin Gaethje already proved the oddsmakers wrong, defeating Tony Ferguson to become the #1 contender for the lightweight title at UFC 249. Can “The Highlight” do it once again against the unstoppable Khabib? At odds of +250, you can bet $100 on Gaethje defeating Khabib to win $250.

Expect the odds to stay relatively the same, with Khabib not going beyond a 1/3 favorite. With recency bias and momentum swaying in Gaethje’s favor, bettors should avail of these opening odds before they get narrower for the challenger.

Gaethje (22-2, 5-2 UFC) was a Division I All-American wrestler who’s also one of the most dynamic strikers in MMA. After an impressive entry to the UFC, living up to his reputation of taking and much damage as giving out.

There came a turning point for Gaethje, where his striking and style needed to be refined. Following the loss to Dustin Poirier in 2018, Gaethje has picked up four consecutive wins (2 KO’s & 2 TKO’s).

In his last outing against Tony Ferguson, Gaethje’s striking coach Trevor Wittman could be heard telling him to stick to the game plan and not get overzealous with the heavy punches. Now the calculated risk-taker poses the biggest threat to Khabib’s undefeated streak in some time.

Our early prediction is that Gathje’s striking and composure could be pose a serious threat to Khabib on the feet. What we haven’t seen out of Gaethje is him utilize his wrestling, which could be what really helps him once Khabib get’s a grip in the later rounds.

Khabib Nurmagomedov has been dabbling with retirement from early in his career. According to ESPN, the most poignant question mark surrounds Nurmagomedov, who lost his father, Abdulmanap Nurmagomedov, on July 3 to complications brought on by the coronavirus after he underwent heart surgery. Their relationship was extremely close, and Abdulmanap was also Khabib’s coach.

One more fight that might keep Khabib around is to challange Georges St-Pierre. Rumours of a St-Pierre comeback circulated online hours before the Khabib vs Gaethje bout had been confirmed. Khabib has also been giving the nod by oddsmakers as the betting favorite to GSP, according to MMAFighting.com.

Stay tuned to BettingInsiderJournal for all the latest UFC news, odds and predictions. #KhabibGaethje