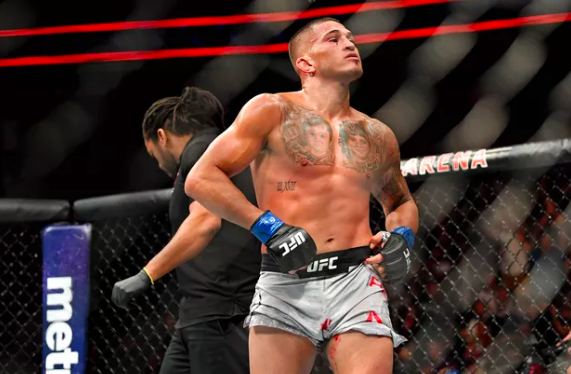 Anthony Pettis is scheduled to face Diego Ferreira in a return to lightweight at UFC 246, on January 18, in Las Vegas, Nevada. UFC 246’s card is starting to shape up, with Conor McGregor and Donald Cerrone headlining the event. We preview the opening UFC 246 odds for Pettis vs Ferreira below.

Pettis Back at Lightweight

Anthony Pettis picked up an impressive win at welterweight over Stephen “Wonderboy” Thompson. After that he lost a five-round war with Nate Diaz, where he looked outsized against the Stockton native.

Lightweight is where Pettis holds his most notable wins and losses too. Overall it’s the best weight class for the aging veteran. When his back is against the cage, he tends to preform his best. So expect fireworks when these two step inside the octagon.

Is Ferreira a Deserved Favorite?

Diego Ferreira isn’t a household name in UFC yet. However, he is only a win or two away from cracking the top ten. Pettis will be a huge win to have on his resume. According to these latest UFC 246 odds, the oddsmakers have it right here putting him as the favorite.

According to MMAFighting.com Ferreira considers himself an underdog: “I think it’s a good match-up for me, because I put pressure, but I’ve seen him submit many top-five opponents… I’m going in as the underdog, but I know what he’s going to do on the feet and on the ground. I’m going in there to fight. I can’t say anything different. I’m focused, so let’s go.”

With only two UFC losses coming from Dustin Poirier and Beneil Dariush, stemming back to 2014-15. Ferreira has grown from his mistakes and hasn’t lost since then.

His most recent wins come against Rustam Khabilov and most recently, back in September, Mairbek Taisumov. Now, the 34-year-old is scheduled to take on Anthony Pettis at UFC 246, the biggest fight of his career lyes ahead.