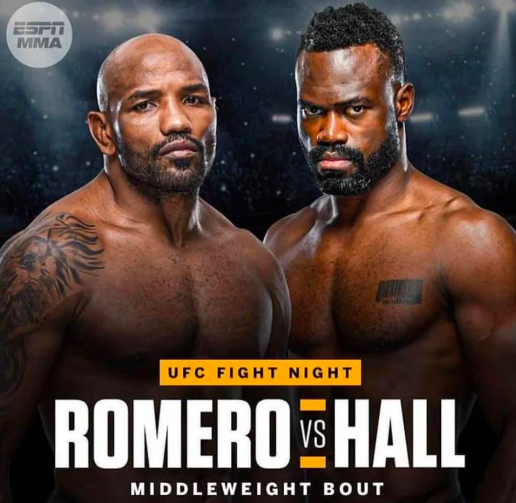 UFC Vegas 7 will feature Yoel Romero vs Uriah Hall, with the co-main featuring Pedro Munhoz vs Frankie Edgar with odds on that fight covered here. Below we cover the opening odds for Romero vs Hall.

The oddsmakers are giving Yoel Romero roughly a 68-75% chance of defeating Uriah Hall. You can bet $213 on Romeo winning to profit $100. For Uriah Hall this a serious step up in competition since losing to Paulo Costa. You can bet $100 on Hall to net $170 at UFC Vegas 7.

Yoel Romero (13-5) is currently on a three fight losing skid. All coming by way of decision stepping from his second and most controversial split decision loss to Robert Whittaker in the rematch.

Romero then went on to challange Paulo Costa in a blockbuster fighter, where Costa stood toe to toe with The Solider of God and picked up the win. Then in a gifted title shot against middleweight champion Israel Adesanya, the pair went the distance in a lacklustre affair.

Uriah Hall (15-9) is riding the two-fight win streak. At UFC Vancouver last September, he picked up a split decision win over Antonio Carlos Junior. Prior to that he knocked out Bevon Lewis in the third round.

Romero cannot play the same type of game he did against Israel Adesanya. While he is certainly on the later side of his career, he still packs serious power. Uriah Hall is a diverse striker and holds wins over Thiago Santos and Gegard Mousasi. However, he has been finished four times in his MMA career which is a cause for concern when going up against Romero.

This fight will be 3-rounds which will favor Romero, but it’s also enough for Hall to fight tactical against the low volume fighter Romero. This fight is one we might steer away from betting on, but you can’t deny Yoel Romero has a clear advantage.