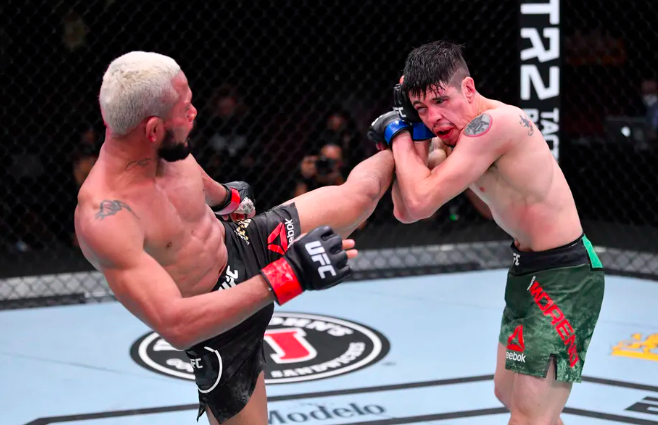 The rematch between Brandon Moreno vs Deiveson Figueiredo is set for June 12 at UFC 263. The event will be headlined by Adesanya vs Vettori, with the latest UFC 263 odds covered here for the middleweight title.

Brandon Moreno showed true grit in the first fight and at +200 he offers real value as the underdog. You can bet $100 to win $200 on “The Assassin Baby”. For the reigning champion Figueiredo, at -250 the oddsmakers are favoring him to win with an implied win probability of 71.43%.

Choose from the best online sportsbooks listed here for betting on UFC 263.

UFC 256 ended in a draw due to Figueiredo’s illegal low blow to Moreno, the fight was close but you can see Figueiredo edged out Moreno on some important stats.

Figueiredo won the flyweight title last July, by defeating Joey Benavidez for the second time. This second win made up for the first bout – where he missed weight and wasn’t eligible for the vacant title. it’s clear that Figueiredo can become a big draw within the UFC, his fight style is aggressive and he puts it all on the line.

While former Flyweight champion Demetrious Johnson is a fantastic fighter, he never got the push while in the UFC to be recognized as one of the greatest fighters to step inside the Octagon. Now with Figueiredo as the champ, he is certainly making waves in a short stretch of time with more explosive action expected at UFC 263.

Will “The Assassin Baby” Strike Again?

Brandon Moreno certainly knows how to step up when the heat is on. He went toe to toe with Figueiredo for five hard rounds. Showing higher fight IQ, while still getting drawn into wars – which he will have to plan carefully for in the rematch,

Moreno is used to being the underdog, as it happens the closing odds were +175 when he fought Jussier Formiga and +144 against Kai Kara-France. Both of which he won that extended his three-fight winning streak prior to fighting Figueiredo at UFC 256.

Overall, I like Moreno’s chances of causing an upset at UFC 263. Look for the prop bets for Figueiredo and Moreno to win by finish and decision, once they’re released. Be sure to check out more MMA news and UFC Odds in our MMA section here on Betting Insider Journal.