UFC Odds Released for Adesanya vs Vettori 2 at UFC 263 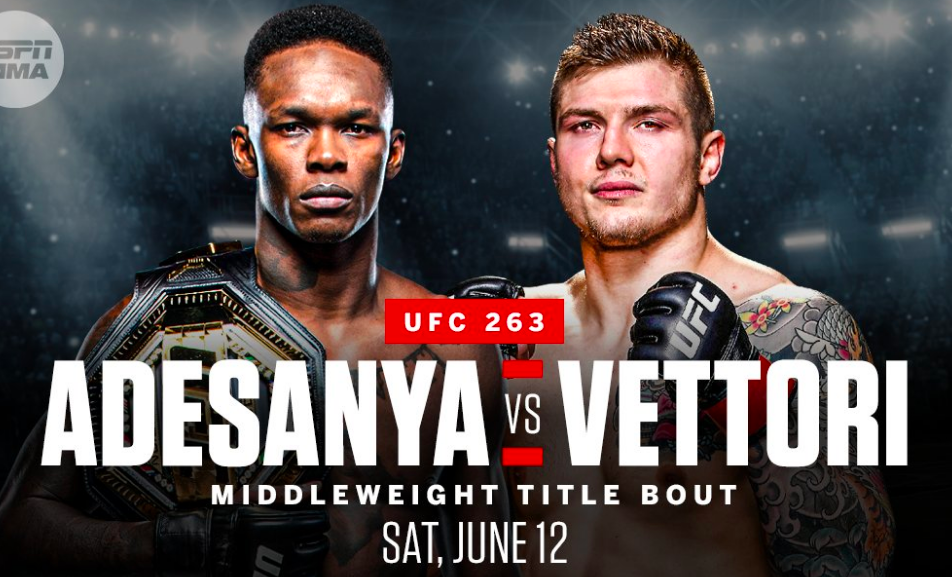 Israel Adesanya is set to return to middleweight to defend his title at UFC 263. His opponent is #3 ranked Marvin Vettori, the pair fought back in 2018 where Adesanya won by split decision. Let’s jump into the latest odds for UFC 263

Israel “The Last Stylebender” Adesanya opens as a solid betting favorite according to the latest UFC 263 odds. You can bet $270 on the champ to retain his title and win $100.

Vettori hasn’t lost a fight since their first fight with his stock rising steadily. You can get the “Italian Dream” at +195 odds, (bet $100 win $205) – expect him to become an even bigger underdog come fight night.

For a whole host of betting props for UFC 263, check out our prediction for Adesanya vs Vettori 2.

For the best sportsbook promo’s Check out our list of sports betting sites here before betting on UFC 263.

Earlier this year at UFC 259 Adesanya aimed for greatness to become a UFC double champion. He came up short against Poland’s Jan Blachowicz, who went on to become the new light heavyweight champion.

Adesanya has reigned supreme at middleweight and while the idea of a super fight against Jon Jones would push the needle, it might not be a realistic possibility after Adesanya’s performance against Jan, and Jone’s interest in fighting at heavyweight.

While Robert Whittaker passed at the opportunity at another crack at Adesanya, due to the close turnaround. They know this is a fight that will be huge later in the year, once Adesanya gets past Vettori a second time.

Looking at Marvin Vettori’s last five UFC fights, the Italian was modestly favored on the betting line to defeat his opponents. While Kevin Holland and Jack Hermansson cemented his spot in the top five, Adesanya is on another level but Vettori has improved since their first encounter.

Entering this fight as the betting underdog will give some bettors hope that Vettori can capitalize on Adesanya’s first MMA loss to Jan, putting the middleweights record to 20-1.

The co-main for UFC 263 is set to be a rematch of an instant classic from last year. Check out the opening Figueiredo vs Moreno 2 odds, with the champ coming in as a -200 favorite.

Then on Aug 14, Darren Till returns to action against, Derek Brunson. We reviewed the opening Till vs Brunson odds. Elsewhere in the middleweight division Paulo Costa opened as the betting favorite over Jared Cannonier for their clash on Aug 21.

Can Marvin Vettori shine in his first UFC title? Comment below!