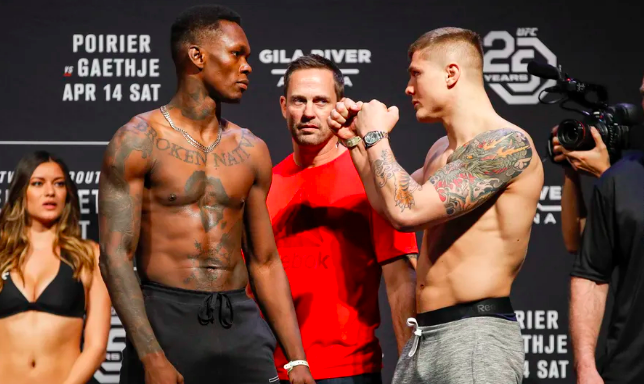 The UFC middleweight title will be on the line on June 12th at the Gila River Arena in Glendale, AZ. In a rematch between Israel Adesanya and Marvin Vettori from their 2018 bout. The co-main will feature another explosive rematch between Deiveson Figueiredo vs Brandon Moreno. We review the possible outcomes for Adesanya vs Vettori Predictions for UFC 263.

Fight Prediction for Adesanya vs Vettori 2

This rematch is three years on from Israel Adesanya’s split decision win over the “Italian Dream”. At the time Vettori gave Adesanya one of his toughest tests on the way to the middleweight championship.

Since then Adesanya has seven wins and won and defended the middleweight title once. More recently I give credit to “Stylebender” for giving it a shot at light heavyweight but losing by decision to Jan Blachowicz at UFC 259.

Now that Adesanya’s aura of invincibility is shattered, it will give Vettori and Adesanya’s future opponents the confidence in going forward and challenging the champion even further.

Looking at the latest UFC Stats for UFC 263, Adesanya has a six-inch reach advantage over Vettori. That will be key for Adesanya keeping Vettori at bay and using what he does best – his striking to chip away. Adesanya also has an 82% takedown defense and is rarely challenged at middleweight on the ground. During their first fight, Vettori managed to land two takedowns on Stylebender, I can see this being a real path to victory for him over the course of five rounds.

In terms of striking Adesanya is ahead of the game and always has been. Vettori’s striking has improved gradually since their first encounter. However, it’s not at the level that should cause Adesanya too much problems. Key for Vettori to have success on the feet is throw accuratetly and in volume.

On average Vettori landeds 4.14 significant strieks per minute, compared to Adesanya at 3.95. Whereas Adesanya has less volume he makes up for that with 5% accuraecy advanatge.

I expect this fight to be absolute fireworks, with Vettori giving Adesanya a competitive fight that could go the distance or a late finish for the champ.

Below are some of my favorite bets ahead of UFC 263 for Adesanya vs Vettori 2. Be sure, to check out our list of top sportsbooks prior to wagering on this fight for the best promos.

Vettori has yet to be finished in his MMA career. Only losing four times and all by way of decision. Betting on the over here of 4.5 rounds, means a $188 wager would net you $100 profit on either fighter winning.

Adesanya wins inside the distance: +190

We have seen Stylebender fight for the kill for example against Costa and we’ve also seen more cautious performances eg. Romeo. This time after coming off his first loss, I expect him to be aiming for a statement win. It’s plus money of +190, bet $100 to win $190 on a finish here.

On the opposite side, the oddsmakers have set a decision for Adesanya at UFC 263, as the most likely possible outcome. You can bet $100 to win $140 on this fight going to the judge’s scorecards with Adesanya retaining his title.

There is definitely an argument to be made where Vettori gets his hand raised. Plus odds of +330 are quite juicy on the “Italian Dream”. Meaning a $100 wager could net you $330.

For more ways to bet on UFC fights check out our MMA betting guide.