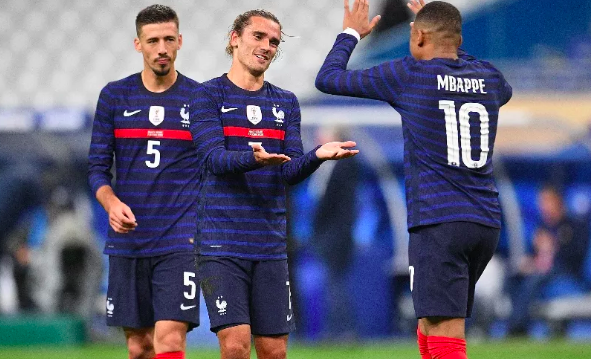 The UEFA Euros get underway in numerous hosting cites this Friday, June 9. After a delayed 2020 tournament due to COVID-19, the teams and fans are eager to start this European tournament. We took the average odds from these online sportsbooks and listed them, with some betting analysis on my favorite picks to win the 2021 Euros.

At the moment it’s a close race between England and France as the latest Euro 2021 favorites. Depending on which sportsbook or media outlet you are reading, at the time these odds were taken England jumped ahead of France after Gareth Southgate released his squad for England’s 2021 campaign.

Gareth Southgate has named his 26-man squad and the inclusion of four right-backs, including Trent Alexander-Arnold, is the main talking point

At +430 England’s implied probability of winning the tournament is 18/87%. That might seem low, but you’ve got to take into account the other 23 teams and the length of this tournament will be four weeks in total. You can bet $100 on England to win the Euros, to win $430.

The French side has without a doubt one of the most talented rosters in the tournament. With the likes of Kylian Mbappe, Antoine Griezmann and N’Golo Kanté included. A surprise inclusion was Karim Benzema who was once exiled from the side six years ago due to a scandal.

Belgium was tipped as future World Cup winners back in 2018 – due to their youthful and skilled squad. They are always a side to be strong contenders and this year and at +650 offer real betting value.

In Group B, their first three fixtures are against Russia, Denmark, and Finland, which shouldn’t be a problem for this side with Eden Hazard as captain.

Sergio Ramos has been left out of Spain’s European Championship 2020 squad by coach Luis Enrique. I still expect the Spanish to top Group E, they have been in fantastic form lately and it’s now time for the younger talent to shine through.

Underdogs at this years tournament

Italy are in Group A with Turkey, Wales, and Switzerland. This should give Azzurri a great advantage to top that group. Italy have not lost an international fixture since 2018 against Portugal and manager Roberto Mancini has selected an excellent 26 man squad that includes Matteo Pessina, Matteo Politano, and Gianluca Mancini.

While Italy are not exactly big underdogs, they do fall outside of the top favorites. Their current odds of +800 means a $100 wager could net you $800 on The Blues winning it for the second time since 1968.

No Euros underdog list would be complete without reigning Euro champions Portugal. They are part of Group F alongside France, Germany, and Hungry. This is easily the toughest group in this year’s tournament, so it’s been Germany and Portugal for second place. At +10000, you can wager $100 on Portugal to win $1000, you can’t deny the Ronaldo factor.

My last pick for underdogs at Euro 2021 is The Netherlands. The Dutch side released their squad recently, which includes Matthijs de Ligt, Frenkie de Jong and more experienced players such as Tim Krul and Cillessen. The one downside is that their goalkeeper test positive for COVID and will not make it.

We want to know what your Euro 2021 predictions are? Comment below!