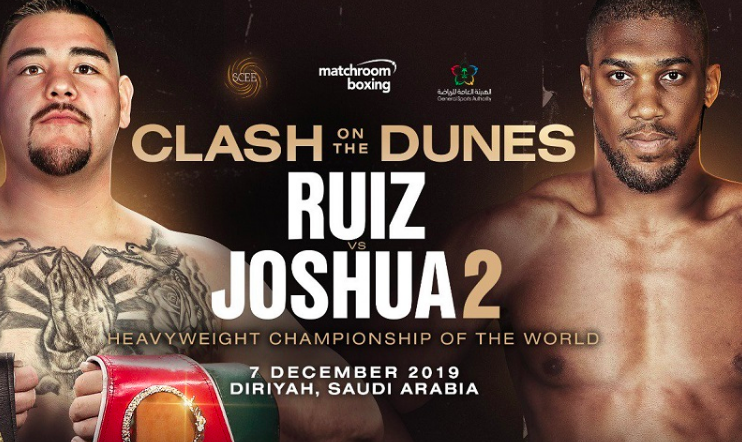 Anthony Joshua will get his chance at revenge against Andy Ruiz Jr on December 7 at Clash on the Dunes in Diriyah, Saudi Arabia.

Previous Betting Insider Journal covered the opening betting odds for Joshua vs Ruiz 2. Now as the location is set the oddsmakers have seen some movement in the betting line between Ruiz vs Joshua.

In their first encounter Joshua was a huge favourite over the last minute replacement Andy Ruiz. Joshua underestimated his opponent and suffered the consequences by losing all four titles in New York.

Andy Ruiz Jr vs Anthony Joshua 2 will be aired on sports streaming service DAZN for North American fans. Meanwhile in the UK and Ireland you can watch Ruiz vs Joshua 2 on SkySports.

Andy Ruiz was adamant that the rematch not take place on Joshua’s preferred choice the UK. Ruiz, who was born in the United States but has Mexican heritage, asked for the title defense to be in Mexico but is happy to take the fight on neutral grounds.

Saudi Arabia could become a defining venue in both men’s careers, remembered as the scene for Anthony Joshua’s claim for world champion status once again. The oddsmakers certainly favour him, installing Joshua as the -300 (3/1) favourite, that contradicts the views of the many respected pundits who feel Ruiz will repeat his success.

Joshua vs Ruiz is one of the most eagerly-awaited heavyweight fights in 30 years after the scale of that surprise.

0 comments on “Latest Betting Odds for Ruiz vs Joshua 2: Clash on the Dunes set for Saudi Arabia”