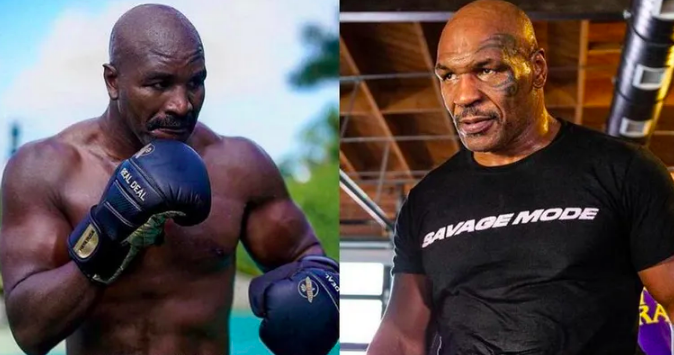 Mike Tyson says ‘The fight is on’, hours after the $25 million fight was falling apart. A trilogy fight twenty fours years after their rematch in 1997. Evander Holyfield defeated Mike Tyson twice with back-to-back victories in 1996-97. Can Mike Tyson finally get a win over Holyfield? The oddsmakers believe so.

According to the latest odds for Tyson vs Holyfield, “Iron Mike” is a -300 favorite. Meaning he has an implied win probability of 75%, bet $300 to win $100 on Tyson getting his first win over Holyfield.

For Evander Holyfield, there are lots of question marks about how fight fit the former undisputed cruiserweight and heavyweight champ will be. For that reason, “the Real Deal” is a sizeable underdog at +250, you can bet $100 to win $250.

Before the trilogy can happen, Triller Fight Club are putting Evander Holyfield in a comeback fight against Kevin McBride. Holyfield opens as a 2/1 underdog against McBride.

In 2020 we saw Mike Tyson return to the ring against Roy Jones Jr. He fought well for a 54-year-old, that had a lengthy layoff. Prior to this fight when Tyson vs Holyfield 3 odds was released a year ago, Tyson was a -286 favorite. After picking up a win over Jones Jr, Tyson is currently a -300 favorite on some online sportsbooks.

In a recent statement regarding Tyson Holyfield 3, Tyson confirmed saying, “I just want everybody to know the fight is on with me and Holyfield. Holyfield’s a humble man I know that and he’s a man of God, but I’m God’s man. Listen, I’m going to be successful May 29.”

Can Holyfield go 3-0 against Tyson?

Evander Holyfield retired with a record of 44-10-2, one of the greatest boxers of all time. However, he kept the train running much further than he needed to, late into the 90’s and returning in the 00’s where he started to lose fights in a row.

Holyfield can still be found as low as +180 underdog on some betting sites. That is a clear indication that he isn’t the massive underdog as some sites are suggesting. From recent training footage, Holyfield looks in shape and could be a worthy underdog bet to defeat Tyson.

There are certainly a lot of unknowns about how Holyfield will look. When he fought Tyson last time, Tyson bit a chunk out of Evander’s ear. Holyfield’s last pro fight was in 2011 when he earned a TKO victory over Brian Nielsen.

While Tyson’s return against Jones was classified as an exhibition match and doesn’t appear on his official boxing record. His last loss was officially to Kevin McBride in 2005. Fans can expect the trilogy between Tyson and Holyfield to be marketed as an exhibition fight for legal reasons to do with the boxing commission and the age of both boxers.

Who do you think will win the trilogy, Tyson or Holyfield? Comment below.

For all the latest boxing news and odds, stay in the loop with Betting Insider Journal.