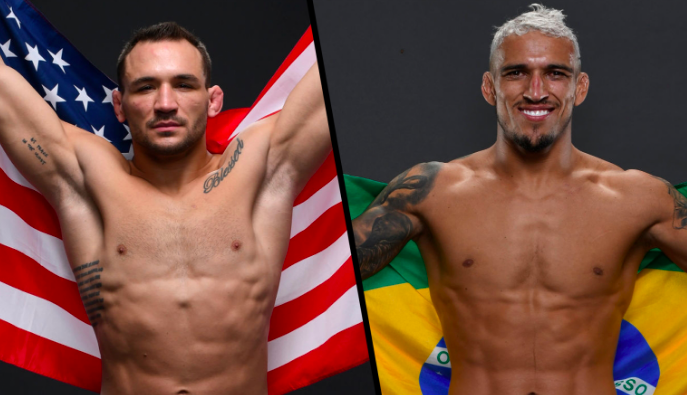 The UFC’s lightweight division is moving on. Dominant champion Khabib Nurmagomedov has retired. Now Chandler vs Oliveira will face off for the lightweight championship at UFC 262 on May 15.

According to the opening odds for UFC 262, Michael Chandler is the slight underdog going up against Charles Oliveira. You can bet $100 on Chandler defeating Oliveira to win $135.

For Oliveira as the betting favorite, he has an implied win probability of 60%. Where a wager of $155 could net you $100 profit if “Do Bronx” wins.

The former Bellator lightweight champion was the betting underdog for his UFC debut at UFC 257 in January. Averaging around +140 on most sports betting sites. He upset the odds in that bout with a 1st round KO of Dan Hooker, and that’s all she wrote.

Chandler’s odds are similar against Oliveira. Being the slight underdog, that’s understandable when we haven’t seen much octagon time from Chandler at UFC 257. However, from what he showed us – he is in the right place mentally and physically to become the next UFC lightweight champion at UFC 262.

“Do Bronx” has had an incredible UFC run. Since 2017, he has gone 8-0 against some real talent at lightweight. His last two performances were top drawer, a submission win over Kevin Lee, and a dominant performance over Tony Ferguson at UFC 256.

The stars are really aligning Oliveira, who has had his fair share of UFC losses and missed weight multiple times. At only 31 years of age, he has the experience and talent no matter where the fight goes to cause Chandler some serious problems.

I for one am totally excited for this bout, it’s important that the lightweight division moves forward. The winner of this bout is expected to fight the winner of Poirier vs McGregor 3, with opening UFC odds here.

In addition to the vacant title being on the line, another vital lightweight bout will be featured at UFC 262. With odds on Ferguson vs Dariush covered here.

Who do you think will have their hand raised at UFC 262, Oliveira or Chandler? Comment below.