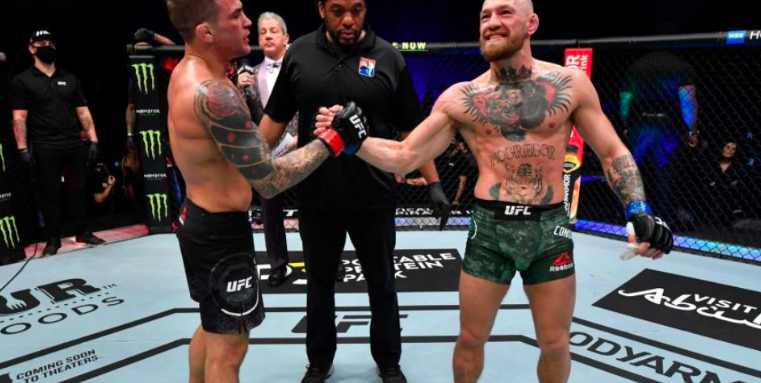 Dustin “The Diamond” Poirer shined bright at UFC 257. Avenging his 2016 loss to Conor McGregor, by TKO in the second round. Now a third fight is confirmed for UFC 264 with opening betting odds already available to bet on.

According to the latest UFC 264 odds, Dustin Poirier opens a slight betting underdog +115. Bet $100 to win $115, on Poirier defeating McGregor for a second time. For Conor McGregor as a modest favorite, you can bet $130 to win $100 against Poirier.

Check out our guide to the latest McGregor vs Poirier prop bets, where you can bet on method of victory or round betting.

I expect the fans and betting public to still be hot on McGregor for the trilogy. These opening odds are similar to the betting line for the charity bout when that was announced. Then by the time, it was made official for UFC 257 and fight night came, McGregor was averaging -300 to win on most betting sites.

There are lots of question marks around McGregor now, such as motivation and his fight style which I will breakdown below.

Ever since Conor McGregor fought Floyd Mayweather, he has become a more boxing dominant fighter. Unfortunately, That style hasn’t transferred as well back to MMA.

For the majority of his early UFC fights McGregor was light on his feet and relied on counterpunching, at UFC 257 we seen his feet planted and he was becoming the aggressor. This meant McGregor overextended his shots, similar to the first Nate Diaz fight. Doing this can be a huge energy drain and something a crisp boxer like Poirier capitalized on.

Then when Poirer came at McGregor with a flurry of punches he attempted a typical boxing dodge and low weave – which isn’t as practical when applied in MMA. That on top of the perfectly executed gameplan of low calf kicks meant that McGregor had nowhere to go – leaving him “stuck in the mud” a style he used to mock back in 2015.

McGregor will need to back to the drawing board and focus on boxing for MMA, which includes throwing shots that keep him on balance with more precision. Focus on his defense including checking kicks and footwork to stay out of danger.

What’s Next For Dustin Poirer?

The who’s who of the UFC has been calling out Poirier after his impressive win over McGregor. First off, Nate Diaz switched gears from McGregor to Poirier and called out the Diamond.

They have some history too, where Poirier had agreed to fight Nate Diaz on November 3, 2018, in Madison Square Garden. The bout was expected to be the co-headliner of UFC 230. However, on October 10, 2018, it was announced that Poirier pulled out due to a hip injury and as a result, the bout was canceled.

Michael Chandler made a huge statement with his quick and calculated win over Dan Hooker. Cementing his place within the top 3 UFC lightweights and is most likely one win away from a title shot.

Personally, my favorite opponent for Poirer to face next is Charles Oliveira. “Do Bronx” is on an eight-fight win-streak and is ranked #3 in the lightweight rankings. Let’s hope the UFC strip Khabib and make Poirier vs Oliveira for the lightweight title next.

If you were to play UFC matchmaker, who would you have fight next? Comment below.

1 comment on “Dustin Poirier vs Conor McGregor 3 Odds, What’s Next for UFC Lightweights”